I put out an APB for some fresh victims to interview and this lovely lady volunteered her time! Please welcome Laura Hunsaker!

I am a writer who loves the idea of a hunky Highlander sweeping me off my feet. So I wrote about what I like. Luckily someone else liked it enough to publish it. I am both traditionally published and self-published. I am a member of Romance Writers of America® Cactus Rose Chapter.

After earning my degrees in English and German, with a specialty in British Literature, I taught for a few years. As of now, I try to squeeze in time to write as often as I can, and I wrangle my kids the rest of the time.

This Highland Hussy will keep writing about those hunky Highlanders as long as you guys keep reading.  Well, I’m not gonna lie to you, I’d probably write them anyways, I mean who doesn’t love a hot Scot?

I’ve been writing all my life, but I’ve only seriously been writing for the past four years or so. I started thinking about publishing my first book because I really had this awesome idea in my head, and I just knew that if I could get it down on the computer, if I could just make others see what I was seeing in my daydream, that everyone would love it. I think it was the best decision I’ve made in a long time.

Oh it does, I write mainly at night. I have young kids, so I’m either home or playing taxi all day long. With their various activities and school and everything, I only have time to write at night. Also, my smarty-pants 7 year old likes to read over my shoulder-with my books, that’s not always a good thing (I’m pretty sure I’ve convinced her that word was “coke” )

I think either Kresley Cole or Karen Marie Moning because they have such rich characters and world-building.

I hope to rule the world! Oh, er, I mean, I’d love to hit the NYT Bestselling list, but even if I never do, I just hope to keep writing about those Hunky Highlanders I love so much.

Both. I’ve been traditionally published for a couple years and just this month I released Highlander Reborn as my first self-published work.

My Magic of the Highlands series will still be through my publisher, but this series called The Nightkind will be self-published as novellas. I think that the main reason I chose to self pub my Nightkind series is that I can control so much more of the process, and I can get the stories out sooner. That was a huge draw for me.

I think I was fairly lucky as far as getting published. I didn’t get more than a handful of rejections and all were slightly helpful or personalized in a small way. I did get two Revise and Resubmits, but I was contracted with New Concepts Publishing by that point.

Highland Destiny is a time travel romance where a modern-day girl, your average twenty-something woman is kidnapped through time. Not only does she have to deal with going back in time, but a girl who had nothing special about her in the 21st century, suddenly becomes Scotland’s Most Wanted in the 18th century.

Highland Games is releasing December 21st. It’s another Scottish time travel set in the same world, and in this one, we meet surfer girl Piper and Hot Scot Malcolm who needs her, but won’t tell her why. Will she choose to stay when she finds out?

In Highlander Reborn (which is out now), I mashed up vampires and Highlanders. I wanted something different, and I wanted it a bit darker than my Magic of the Highlands series Highlander Reborn begins in Scotland, many centuries ago, where a blacksmith fights for his life and his people. His life is forever changed when Amalia, one of the Nightkind, makes the choice to save his life. But first, he has to die…

I spend way too much time daydreaming, and I thought that if I wrote them out, it wouldn’t seem so ridiculous. I mean I would zone out thinking of these warriors in kilts who could swing a heavy broadsword with deadly precision, yet still be gentle and tender with his woman. Now instead of daydreaming, I call it “plotting.”  😉

You should love Nevin, because it takes him 7 centuries to really understand what he’s become. He was turned into a demon, into what he hunted, and that nearly broke him, What made it worse, was that he lusted after the vampire who turned him. In fact the next story coming up is called Broken Highlander because it’s about the dark days after he was turned.

Not one I’ve shared with anybody lol I do have certain songs I write to.

My favorites are “All Falls Down” by Adelita’s Way

Thank you so much for taking the time to show us the Highlands in your mind and good luck on your release in December!

You can follow The Highland Hussy on her website and you can find her books at Amazon, Barnes & Noble, Fictionwise, Kobo and AllRomanceEbooks! 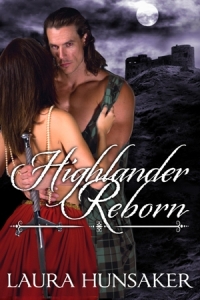