Reading this interview I almost jumped for joy. Out of all the interviews Ive done she is the first one who’s favorite author is the same as mine! 🙂 Enjoy and give a warm welcome to Aubrey Brown!

Aubrey Brown was born in Salt Lake City, Utah, and has had a passion for writing for as long as she can remember. The first book she read, outside of a school assignment, was a pilfered romance from her mother’s collection. And she has been addicted to the written word ever since. She is married to her high school sweetheart and has one incredible son. She started writing to tell fabulous stories to those who want to read something different from the average erotica. She is a firm believer there is a happily ever after for anyone who has the courage and conviction to reach for it.

I have always had a passion for the written word. I had a very hard time reading at my grade level in elementary school, so my grandmother forced me to sit down with her and read. I got to the point where I loved to read and was beyond my current grade level. I moved on to work with the journalism staff, dead poet’s society, and the school’s short story magazine. I decided to be an author, by the time I graduated High School.

I have an amazing four-year-old boy who takes up most of my time, so I find myself writing during naps and very late into the night. Alternatively, if I have a deadline, my sister will take my son for the day, and I am free to write!

I love, Steven King. He is imagination personified. The massive amount of intelligence within his literature is staggering. I also enjoy historical literature by, Julia Quinn.

I hope to bring joy and pleasure to anyone who reads my works. My ultimate goal has and always will be to entertain my readers. 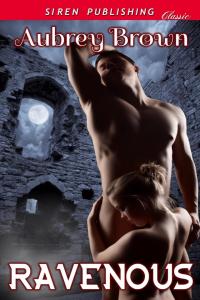 Both! Ravenous is a traditional publish, as well will the sequel, Hunger, which is due to release in August. Furthermore, the third installment, Crave will come out directly after. I am in addition writing a short for Amazon, BN, and Smashword entitled, Cursed, and lastly, another novel due to release in November called, A Very Merry Chase!

Talk about your journey into the wide world of publishing.

It all started when I complained to my husband that a novel I was reading was horribly written. He told me to write my own novel if I thought I could do better. And I am never deterred by a challenge, so took him up on his dare. I wrote for a submission call to a competing publisher. They read over the novel, and we ended up not being able to come to a contractual agreement. I then sent my novel to Siren and was offered a book deal! Later, they offered to publish the two subsequent books.

Ravenous is a historical/ paranormal erotica that is set in England.  Here is a synopsis: Emma Westlake is engaged to a Duke, whom she does not want to marry. There are rumors circulating through the ton that the Duke is responsible for his wife’s death. Feeling as if her life is in danger, Emma must flee to a castle near the sea to be a governess to two adoptive children. She is employed by a man who is eccentric. There are no mirrors in the home, and he is never about during daylight. Gabriel Saxon-Worthington has no idea who this mystery woman is, save her name, Mercy, and the sudden impulse to sink his fangs into her. They are both seduced by each other’s brand of secrecy and engage in an affair that could lead to a deadly end. Gabriel is a vampire with a lust for Mercy’s blood, but will they be able to find eternity together before the Duke discovers her, or will he remain Ravenous?! The novel is rated Sextreme and is extremely HOT and adventurous.

I was inspired by the submission’s call, and the fact that I love historical novels and vampires. The call was described as follows: Write a historical piece that finds a woman of title and breading, leaving her home to seek employment to better her circumstance. And lastly, to make is a dark romance, and what is darker than vampires and monsters who go bump in the night?

My leading character has been described as being out of a Jane Austen novel. He is a dark and brooding man who has a taste for his new governess’s blood! He is secretive and mysterious. You will love him instantly. My heroine is a strong woman who falls in love with the Hero and finds herself keeping her own secrets as well. The dark sadistic duke she is to marry was especially fun to write, because he is so evil and has no conscience for what he does.

Thank you again for joining us this week! You can find Aubrey on her website! Her book is available on Bookstrand, Amazon and Barnes & Noble.