This week we have a treat from the Prairies! Please welcome Elizabeth Hull! 🙂

Elizabeth Hull, writing under the by line of C.N.Lesley, lives in Alberta with her husband and cats. Her three daughters live close by. When she isn’t writing, Elizabeth likes to read and to paint watercolors. She is also a keen gardener, despite the very short summers and now has a mature shade garden. Once a worker in the communications sector, mostly concentrating on local news and events, she now writes full time.

My first attempts were in high school. I just loved weaving a story together. Many years later I got to start a real book. It was really dreadful and will never see the light of day, but it did teach me what not to do. Learning the craft came from membership with the Online

I started writing that first book as an escape to the mind-numbing shows my three girls liked to watch when they were little. I also got to write in the evening, when they were in bed. Later on, I purchased a typewriter from a garage sale and the girls were quite competitive over trying it out. However, their big problem was figuring out which key for which letter. Yep, it was a teaching machine, which didn’t bother me as I had learned to touch type. I thought I had found a perfect solution to having my toy to myself until the day I found the keys covered with the letters in black marker. Now they are grown up and in their own homes so my time is my own. 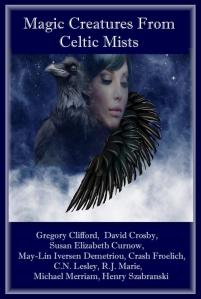 Now I am torn. J.R.R. Tolkien because of the wonderful characters and the glorious worldbuilding and also Frank Herbert for similar reasons.

I would like to see all my books in print eventually. The next one up is a science fantasy called Shadow Over Avalon and is out in November. It is the first of a trilogy. I am also in the process of writing a sequel to Darkspire Reaches, billed by my publisher as a dark romantic fantasy.

Small Indy press. I tried the traditional route and couldn’t get an agent interested. My books are a little out of kilter with the easy shelving an agent loves. Small press gives me the expertise needed, the backup and the marketing. Also, great covers.

Talk about your journey into the wide world of publishing.

Grins. The timing was very difficult. I had sent a query for Darkspire Reaches to Kristell Ink, thinking nothing more of it as I was in the last week before my second daughter’s wedding. I was very shocked to get an almost instantaneous reply from them, wanting the full manuscript. Opps. I had only gotten halfway through on what was my final independent edit. Yes, I had gone over it many times before, but I needed that final run through and explained the circumstances. They were very nice about it and happy to wait. I got a very swift response when I turned in the book and a contract followed. Yes, the book went through another edit with the in house editor, but not much was changed. The most exciting part was the cover process, of which I was a part. The cover is an artist’s rendition and I am absolutely thrilled with it.

Giving the blurbs is easier. Here is my one for Darkspire Reaches.

Darkspire Reaches – C.N. Lesley
Her birth mother left her as a sacrifice to the Wyvern, believing a second
born twin had no soul.
Her foster mother thought Raven possessed the magic of the First born. She believed she raised a slave.
The emperor of all the lands believed she knew the secret of his birth and
that he must silence her.
Her tribe thought they could trade her for safe passage out of the
emperor’s lands.
The Wyvern knows better. He is coming for her. His fury has no limits.

Raven always knew nobody wanted her: Her own mother abandoned her as baby for a wyvern sacrifice. Saved by a local witch to a hard life of labor, Raven always fears a wyvern would hunt her. And when one does he takes her to the mountain aerie of Darkspire Reaches, where she encounters the mighty Drakken lord. Apart from being handsome and powerful, Connor is the most arrogant, self-centered, difficult man Raven has ever encountered. Instant power battles ensue leading to a sparkling love/hate relationship.

This is the one I came up with for Shadow Over Avalon, although it is far from final. It needs to be much more snappy.

Imagine being raised in a strict elitist environment because of very special abilities. All Arthur wants is to fight the enemies of humanity on the surface world. He dreams of freedom from his captivity in an undersea city.

Ashira, a Warrior Maid, wants a normal life away from her dysfunctional family—a home, husband and children. Not much to ask for one of the ruling class, as this is the way for fort dwellers. This isn’t in her future in the way she envisions.

Someone has been waiting a very long time to move his prime pieces into position for the final gambit. He doesn’t care if dreams are shattered, or if happiness is destroyed.

And then there are the others—the ones no-one would care to meet in the dark. These are the hidden ones, who control all.

Here is the one written by the editor of the Anthology.

A soldier on leave suddenly finds himself at the battlefront and at the mercy of the dreaded Morrigan. Next, a kelpie is given a mission by the undine who rules the river that is his only path to Faerie. A disabled man, drawn into the world of the Shining Ones, must save the fairy he loves from herself. Then a high-strung jeweler finds he has more in common with a thieving Cat Sidhe than the people of the town who accommodate her…

Magic Creatures From Celtic Mists features eleven stories with distinctly different plots and themes, some whimsical, some frightening, and others bittersweet. Together, they feature contemporary imagining of creatures of Celtic myth, portrayed in both ancient and modern settings, with respect for their rich cultural origins and historical significance. It is a tribute to the past that celebrates its continued and compelling influence on the present in which we live.

I grew up reading fairly stories and gravitated to fantasy and science fiction. I guess I needed a world apart and naturally my ideas reflect this.

My main characters are very real. They are not perfect and they do make mistakes. How they deal with this is what makes them come alive. This also follows through with antagonists. No one is totally evil and there are redeeming, humanizing features in all of them, particularly the most nasty ones.

The trailer here, but if Darkspire Reaches had a sound track, then it would be the song Veshangro from Incredible String Band. This was the song going through my head as I was writing the book.

Her books can be bought from any of these fine retailers: