Please give a cold dead welcome to our next guest on the blog this week… Brad Walseth! 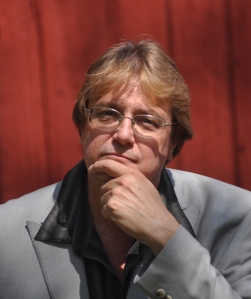 So, what have you written?

Two novels: One – Crystal Falls is published through an independent press (Satalyte); the other – The Courier is self published.

Where can we buy or see them?

What are you working on at the minute?

My work on the sequel to Crystal Falls (Bone Lake) has been interrupted by the need to create a screenplay version of Crystal Falls. I have recently completed the first draft of the screenplay and have begun editing the next draft.

What genre are your books?

I am aware of the desire for readers to stay within their comfort zones, but I personally find the need to stay within the boundaries of any “genre” to be too limiting to the array of possibilities to open new doors to experience for both the reader and the writer. As such, I would say my writing is cross/multi-genre. Ask any agent and they will tell you this is the kiss of death for marketing books to the mainstream. Ask an intelligent and open-minded reader/thinker and they should tell you that they are sick of the dumbing down and compartmentalization of literature into mass-market drivel.

If one feels the need to describe them as such: The Courier is an Action/Adventure novel with some elements of Psychological Thriller and Military genres, that is fairly straightforward chronologically in time (with exceptions), but with twists, interesting characters and some commercial appeal. Crystal Falls, on the other hand, is a Literary/Crime/Murder/Coming of Age/Love Story/Psychological Thriller/Slightly Paranormal/ Experimental Novel with multiple plot lines/incessant dialogue/flashbacks/changing POVs/references to literary and cinematic works/inside jokes/religious/political/humor/violence/drugs/ sex/big words/twists and “cruelty to animals” with little obvious commercial appeal, but providing rewards for the rare intelligent and open-minded reader.

What books are you reading at present? 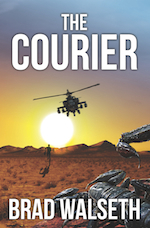 I just finished Middlemarch and John LeCarre’s The Secret Pilgrim and have started re-reading A Canticle for Leibowitz, which I haven’t read since I was a boy.

Where do you your ideas come from?

I am constantly compiling a file cabinet in my brain of characters and events I come across in life. For The Courier, I used my time as a stockbroker in Chicago, as well as a trip I made to Zurich to flesh out the initial idea I had of a person being placed in a situation where they had a limited amount of time in which to save someone (In this case, a courier whose plane is hijacked and crashes south of the border in Mexico, who has 6 hours in which to make it back to the U.S. with the heart he was to deliver to save a young boy),

For Crystal Falls, there were events I read about in the newspapers: a killing at a party where no one would step forward and testify against the murdered, another one where a street kid was murdered and the killer (s) got away with it, both entered my subconscious and lingered to form the basis of the story. Other storylines, such as the scene where the pastor urges the hero to join the CIA and the cop suggests a plan to cook bathroom speed, come from events from my own life. The characters as well, while not usually based on a specific individual, often display characteristics of people I have known in my life.

Do you work to an outline or plot, or do you prefer just to see where an idea takes you?

I am sure many writers feel the need to work under specific rules; however, I believe in using whatever means are appropriate for the work I am producing at the time. The Courier was heavily outlined due to its chronological time-sensitive plotline; whereas, Crystal Falls was written in completely random chapters. I didn’t know the ins-and-outs of the characters or the intricacies of the plot when I started, but I did have a general idea of certain elements I thought I wanted included, so I started with that. I knew I wanted a scene with a smash-and-grab robbery at a pharmacy, and that was the first thing I wrote. I knew I wanted them to jump a train, etc… As I wrote the chapters I knew I needed, the characters revealed themselves to me and different potential plot directions emerged. As a rather astonishing side note, and one that completely goes against the usual rules of writing, I had absolutely no idea how the book would end, and when it did, I was as shocked and surprised as I suspect most readers are.

How long on average does it take you to write a book?

Strangely, both books took 9 months (not counting the never-ending tweaking and rewriting process that may go on forever), as have many of my musical projects. In my case there is a clear connection between creativity and the human gestation period connected with giving birth. I am curious if any study has ever been done on this.

Any tips on how to get through the dreaded writer’s block?

Forcing the issue is rarely the answer, although sometimes you can just buck up and bully your way through a problem. Considering all alternatives, including the exact opposite solution is sometimes helpful (for example, in life you are blocked by a wall and are unable to go over or under: maybe you need to head in the opposite direction and find a door or bridge that will take you there instead). I personally find that exposure to Art and Nature are the keys. A refreshing walk in a forest or by the water replenishes the spirit. Art museums, films (especially foreign), interesting architecture and great music inspire me greatly. I found the Tate Galleries in London to be perhaps the greatest kick in the behind I have ever experienced. Take a break from writing/reading, listen to Sibelius or Miles Davis and pick up a book of artwork and let the sounds and images take you along into a different and more creative vibration.

What is your favorite book and why?

As I get older, it has become increasingly apparent that even the greatest books written have their flaws, while many extremely flawed works have incredible works of insight and beauty. While there are unlimited moments of the latter that I can recall and treasure, aside from Hamlet, I can only recall two extended instances of near perfection in literature: Dostoyevsky’s Grand Inquisitor sequence from The Brothers Karamazov and the middle section of Virginia Woolf’s To the Lighthouse, where her writing attains a shimmering form of sensitivity that transcends any writing I have ever experienced.
While my favorite books list is too long to list here, is based somewhat on my own experiences and prejudices, and would probably change upon re-reading, I have for years declared my favorite book to be Thomas Pynchon’s masterpiece exploration of love and death – Gravity’s Rainbow, which despite its flaws, opened up my mind to the unlimited possibilities inherent in language and the novel.

What is your favorite film and why?

I know it’s been endlessly parodied, but my favorite film is still Ingmar Bergman’s The Seventh Seal. In a world where most films (and books) are geared at adolescent-level thinking, it is one of the few, and the best, to ask the most serious questions to continue to plague humanity.

What is your favorite quote?

To think, to dream, to conceive fine works, is a delightful occupation. It is dreaming cigar-smoke dreams, or living a courtesan’s self-indulgent life. The work of art to be created is envisaged in the exhilaration of conception, with its infant grace, and the scented colour of its flower, and the bursting juices of its fruit. These are the pleasures in the imagination of a work of art’s conception.

The man who can formulate his design in words is held to be out of the common run of men. This faculty all artists and writers possess; but execution needs more than this. It means creating, bringing to birth, laboriously rearing the child, putting it to bed every evening gorged with milk, kissing it every morning with a mother’s never spent affection, licking it clean, clothing it over and over again in its prettiest garments, which it spoils again and again. It means never being disheartened by the upheavals of a frenetic life, but making of the growing work of art a living masterpiece… This is the the travail of execution. The hand must constantly progress, in constant obedience to the mind. And the ability to create is no more to be commanded at will than love is: both powers are intermittent.

The work of the mind, tracking down a quarry in the high regions of the intellect, is one of the most strenuous kinds of human endeavor. To achieve fame in art — and in art must be included all the mind’s creations — courage, above all, is needed, courage of a kind that the ordinary man has no idea of…

Thanks so much for joining us this week Brad! Be sure to follow Brad and check out his work!