Please welcome the handsome Gerald Johnson… and his alter ego Damien Drake to the blog this week!

In school I wasn’t nearly as outgoing or as verbal as I am now. In truth, I was pretty much that loner kid that you see off to the side just watching the world behind a pair of sunglasses and talking to the few people who took a chance to stand around talking to me. I did a lot, and I do mean a LOT, of reading and because I was a loner I was always writing something. I used my stories to make up the friends that I didn’t always have. It wasn’t until I got into high school that I starting gaining my “confidence” and it was with the constant pushing on my English teachers that I began to really get into my writing. I was on the journalism team and my stories always got rave reviews and this really began to set me off

into the realm of wanting to really become an Author. At the age of 16, I wrote my very first full novel, but I never did anything with it because once I was finished I watch the movie Conan the Barbarian and realized that our stories were just too close. After that I became the biggest fan of Mr. Robert Howard, the author of the big Cimmerian.

What are your ambitions for your writing career?

My ambitions… well I currently have not quite a dozen completed manuscripts right now(no my publisher hasn’t killed me yet, but she has made the threats). What I am looking forward to happening is becoming one of those authors who top the New York Bestsellers List … I am also preparing to teach myself Final Draft so that I can began doing screenplays of the books that I have… I am hoping to one day see some of these books on the big screen for the world to see. AND, one thing that I’d love to do is sit down with some of my favorite authors and just have lunch and discuss books and writing and seeing it all come together.

So, what have you written?

WOW!!!! Let’s start with what I’ve actually had published because that’s a shorter list LOL… Currently I have had 4 books published. My first was a book of poems that I wrote in the mindset of my alter ego, Damien Darke, and it was titled Pitch Darke: the Poetic Chronicles of Damien Darke. This was a series of poems all pretty much centering around a darker period of my life.

The next books published are a part of my very first set of novels. The Tainted series came along after complaining to my publisher about some of the urban/street literature stories I’d been reading while I was in the hospital dealing with my leukemia fight. I wanted to read something that didn’t sound like something else that I’d already read and my publisher’s words to me was,

“Gerald, if you’re not reading something that you like… then you need to write it.” That’s exactly what I did, and thus Tainted: the Book of Revelation and Tainted: the Book of Retribution was born. This series follows the life of a young lady who is given control of her husband’s multi-million dollar business after he discovers that his business partner and best friend has been poisoning him. Now she must deal with a group of men who are out to kill her and anyone trying to help her in order to take back the company they feel should own.

Give us an insight into your main character. What does he/she do that is so special?

In my Tainted series my main character’s name is Courtney Roulette. She was born in Missouri but she’s lived in Tampa, FL since college with her best friend Nina Carleton. I would consider her pretty naïve to begin, you find out quick that she’s been on the run with her drug dealing boyfriend because he’s being hunted by men who think he’s double crossed them. She winds up in California with him before they’re trapped in a hotel and he’s finally captured by the police. Once she gets back to Florida she works on getting her life back in order and she falls in love with businessman Sydney Roulette. It’s on the night of their honeymoon that she finds out the truth of her husband’s business dealings, and that his best friend has been poisoning him to take control of their company… he offers to train her so that she can take over the business. Courtney must come to terms with the fact that she’s now dealing with men who have no problems killing as a bull’s eye has been put on her back… she must now grow up in ways that she’d never dreamed up, she must become just as ruthless as the men she’s dealing with. Her growth is gradual but distinctive… it’s believable and doesn’t just happen over the course of One book. She has to learn to trust the people around her helping her through this process, as she fends for her life against the sharks that are out to kill her. She becomes my tribute to Urban Drama, and I love the response I’ve gotten about her and her growth.

What are you working on at the minute?

At this minute, I’m working on a one of three novels I began during the NaNoWriMo in November. The title is Driven Obsessions, and I am, I hope, about 2 to 3 chapters from being complete. The book is already around 60000 words.

This book centers around a national bestselling author named Ladarrious Cross and the women in his life. He quickly finds out that his ex-wife is stalking him and right the beginning she almost has him arrested because of a beating she’s taken and initially she blames him. As the story unfolds, Ladarrious finds out that women he’s been involved with since he’s separated from his wife are now being killed. There’s a series of twists and turns and the book has a lot of erotic scenes(definitely not for those under 18), it’s wrapping up to be a beautiful piece of work.

Have you written any other novels in collaboration with other writers?

When did you decide to become a writer?

I don’t think I ever decided to become a writer, I honestly believe that I was always meant to be a writer. I’ve been doing this for so long that I cannot say when I actually started, and until I can’t do this any longer I know I’ll always be writing something.

Do you write every day, 5 days a week or as and when?

The overall attempt is to get something done every day. It may not be on any of the books, it may be a few poems, but I want to write something daily to keep the ideas running and flowing. My time with my ex-wife was the only time when I wasn’t able to write as I wanted to, and since I left that situation I’ve made it my BUSINESS to get my writing in on a daily basis. 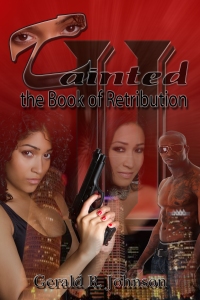 Do you aim for a set amount of words/pages per day?

It can really depend on where my mind is that day on the words I’ll try to get in. Now, if I am working on my books I do have a word count that I aim for per chapter because I feel that it makes for a more complete chapter and that’s anywhere between 2500-3000 words. I try not to go any less than the 2500 words, but I have been known to blow that 3000 words with ease.

Where do the your ideas come from?

The ideas can come from where. I have a flash fiction piece I’ve been working on called A New Hulk and it’s based on a female hulk that’s more like the original Hulk in origins, and I got this idea after seeing this young lady walking down the side walk downtown wearing a hoodie over her head and a carrying a backpack. I immediately heard the old t.v. theme song for the Hulk playing in my head, and so I came home and there it was. The stories just happen, the voices begin talking and the words just flow. I have I don’t know how many notebooks on my laptop and tablet filled with story ideas that I’ll eventually get to.

How do you think you’ve evolved creatively?

I must say that I love my evolution as a writer. I got my start from comic books and story books in school. I love Edgar Allan Poe and I’ve written stories similar in style, and my first full novel was based on my character and adventures in playing Dungeons & Dragons in high school. Over the years I’ve learned and developed my own voice as a writer, two voices if you consider that my alter ego has his own style of word play. And, I think that we’re just at the summit of the mountain with so much more to learn and grow.

Thanks for joining us this week Damien… I mean Gerald! Please be sure to follow him (them?) and check our his (their) work!

Tainted: the Book of Revelations

Tainted: the Book of Retribution: